Just a few days after rolling out some design changes with the aim of increasing user accessibility, Twitter has had to return to the design desk for a very good reason. According to Gizmodo, the design choices Twitter has made are causing some people eye strain and headaches.
Earlier, on Friday this week, Twitter announced that it had tweaked the contrast of buttons on the interface of the website to better suit users with visual problems. However, that has led to the company receiving a series of complaints that the new Chirp font, high contrast colors and buttons, less gray background color, as well as the number of dividing lines between items are broken. reduced… has had a negative impact on the experience of many people over the past few days.

One user with autism said that removing the dividing lines between items and increasing the contrast of colors and buttons made the site "extremely annoying".

" As someone with autism, getting rid of the lines and switching to high contrast makes using the site extremely uncomfortable " - according to user @MxKelsieSkye. " Also, the font looks fine when I look up close, but for some reason it makes my eyes blurry after a long time. Hopefully this is just a buggy beta "

Another user said he couldn't read the Chirp font and didn't know what to do when his phone automatically updated the app to the new version. Many others say they suffer from some health problems, and are currently unable to view Twitter without a headache.

"The new font aggravates my astigmatism. I can't read without a headache. My system font is fine-tuned to suit my eyesight, " wrote user @_psot. 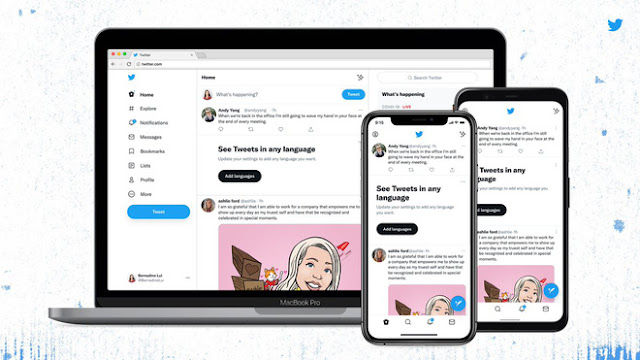 Earlier this week, the company asked users to tell them if they were experiencing headaches, migraines, or eye strain because of the new font. At the time, Twitter also discovered that their site had some display errors and was working to resolve them.

The company repeatedly emphasizes that it is listening to user feedback on the new design.

" We're going to change the contrast of all the buttons to make them easier to see, because you told us the new design doesn't seem comfortable for people with eye problems. listen and edit " - Twitter said on their Twitter Accessibility account.

Alex Haagaard, a founding member of Disabled List, points out that Twitter's design changes are an example of how one tweak can't fit all. In fact, experts claim that customization, for example allowing users to change the contrast and font according to their needs, is the best way to make a website more accessible.

In a press release, Twitter said that it consulted with feedback from disabled users during the creation of the new design.

" However, everyone has different preferences and needs, and we will continue to monitor their feedback and refine the experience, " the company said. " We realize we might get more responses in the future and will try to take them all in ."
Related Posts: